Two things have been on my mind since the last time we played live:

Trying to play acoustic instruments loudly in a typical live show environment is a challenge in itself, but the hardest part for me is getting it to still sound like an acoustic instrument, even though I'm plugged in through a piezo pickup, effects, and an amp.

My first step in getting better live tone was to get an amp that was made for this (Fishman Loudbox Artist).  Compared to running directly into the PA, it's a huge improvement.

I have been pretty satisifed with the tone through this setup while playing ukulele (using a condenser mic pickup from Myers Pickups), however acoustic guitar plugged in direct still has that "rubbery" direct pickup sound.  All of the nice sparkle, overtones, and harmonics that ring through in recordings are gone.  This bums me out!

So, for a while now I have had my eyes open for some kind of gear that would solve this problem, and it turns out that it does exist!  Last week, I picked up a Fishman Aura Spectrum DI box.  Without getting too technical, basically what it does is put the sparkle, overtones, and harmonics back into your direct acoustic tone.  The way that it accomplishes this is called "Acoustic Imaging" and you can read all about it here.  I was skeptical at first, but it really does give you back some of your tone.  It also includes a compressor, EQ, feedback supressor, and tuner (which are all helpful with part 2 of this rant).

Problem solved.  But as always, now there are other problems.  Too many pedals!

This takes me way too long to set up and tear down: 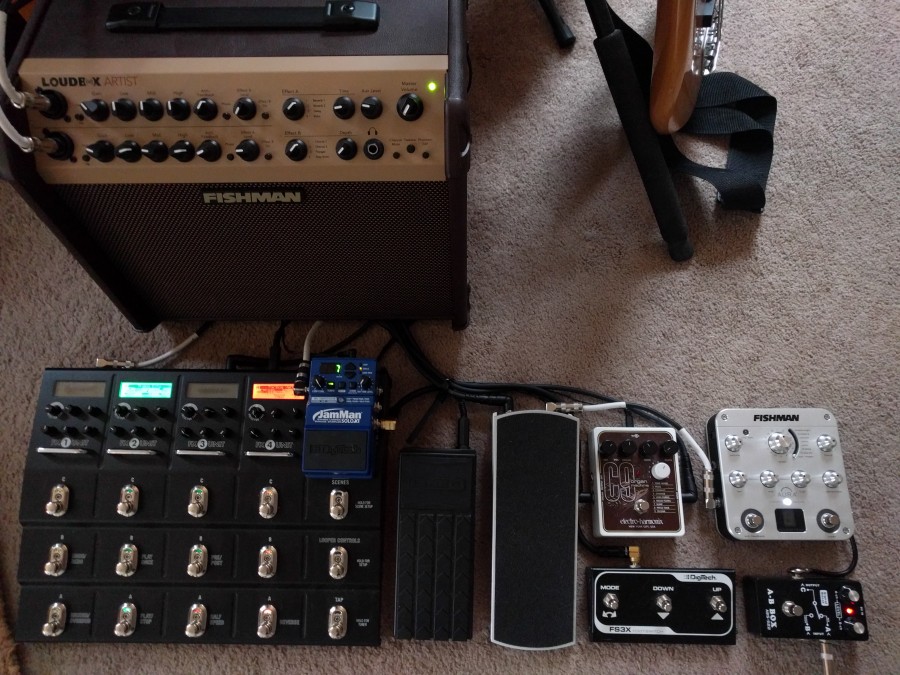 Time to build a pedalboard!

At first, I was trying to find one that would hold everything, including the Line 6 M13, which is enourmous.  It's already the size of a pedalboard (because it basically is one).

It wasn't long before I realized that the new board should be for everything other than the M13.  They should instead be set up side-by-side, and I'll just have to live with the extra step involved with having to store the M13 separetly and re-connect it each time.

I have been toying with the idea of replacing the M13 alltogether, but at this time it is still necessary as all of my delay, reverb, modulation, and looping are still running off of it.  Maybe I'll downgrade to the M9?  I don't know.

Anyway, I ended up going for the Pedaltrain Novo 24 pedalboard, knowing that it is a little bigger than what I currently need but that I may soon need the space if I were to replace the M13.  It also gives enough room underneath to hold power supplies for everything.  I am able to run the Spectrum Aura DI and A/B box off of a One Spot, however, the EHX C9 and JamMan both MUST have their own power supply, or they will BUZZ.  That means I have 2 "wall-warts", a One Spot, and then the M13's power supply which is basically a brick to fit underneath.

I got started around 7pm... 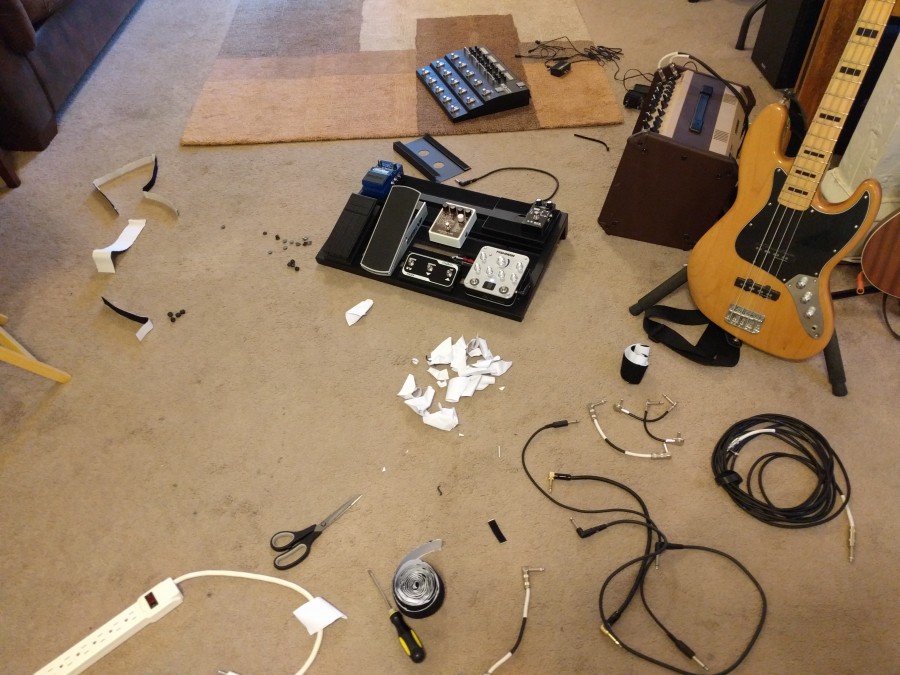 Things went pretty smothly.  I figured out the best way to arrange everything, and started to run cables.  Then it was time to deal with power.  The underside of the board became a mess pretty quickly, and I decided it was time to re-evaluate.  I decided that I needed a black power strip so that everything matched, and while I was at it, one that has more ports.  I also could make things better if I had a few extra patch cables.

It was also now after midnight somehow, and I had lost all track of time.  My Amazon order was placed and I didn't get back to messing with it for a couple of days. 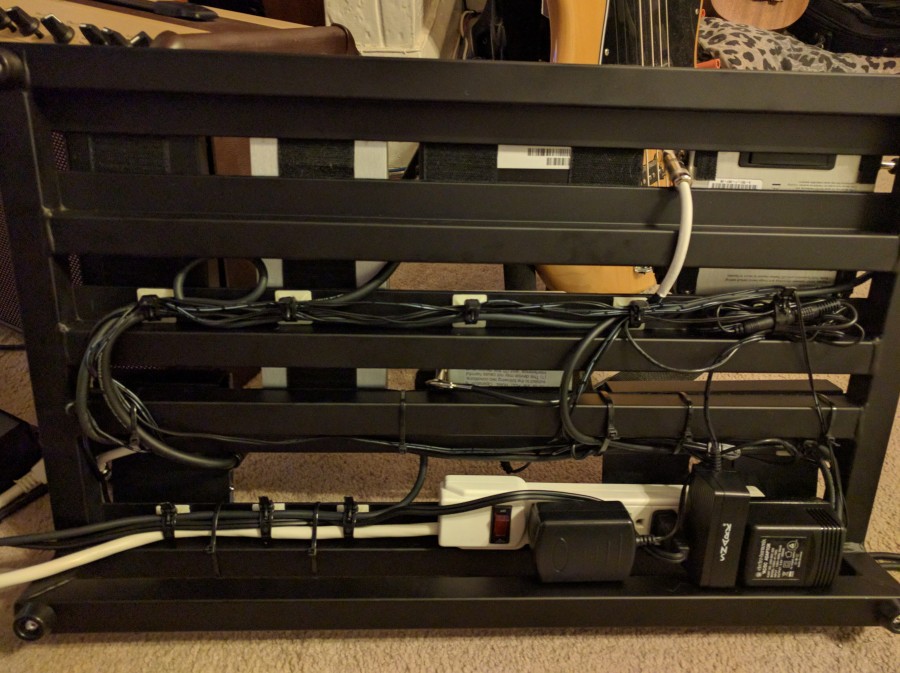 My new powerstrip and cables arrived today and I immediately took apart the pedalboard and thought through everything a bit more.

The black powerstrip was a really good call, since part of it does show through when looking at it from up top.  The whole board is just a lot nicer looking now.  The new powerstrip also has a really long cord which will be helpful on stage.

After getting all of the cableing installed, as well as the new power strip and the M13 power brick, the last piece was the effects loop that goes out of the left side of the pedalboard and into the M13, then back into the Fishman Sepctrum.

There may still be some cleanup to do on the underside to secure everything, but I need to do some testing to make sure that this setup will work for me in a live setting before I finalize it. 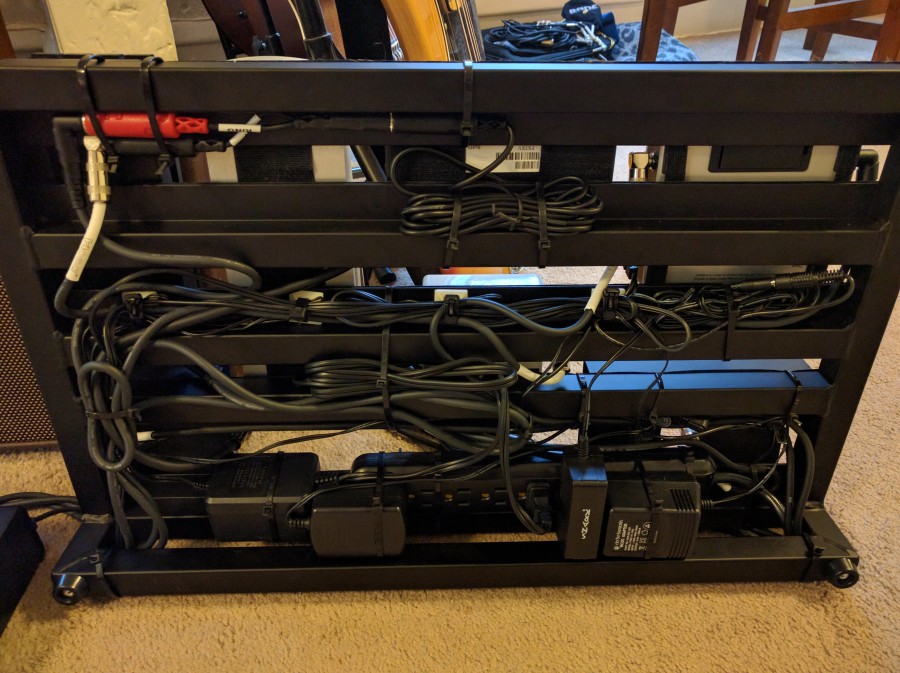 And here is the finished product! 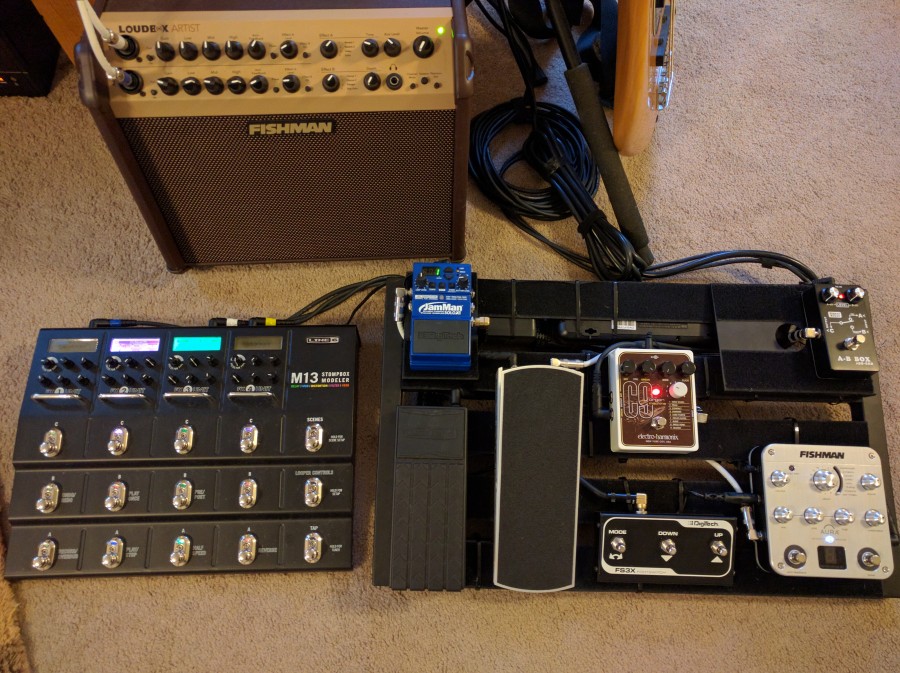 I've added a Strymon El Capistan tape echo pedal and a Pure Tone buffer and re-arranged things a bit.  I'm currently working on finding something I can use to prop up the Digitech footswitch that is turned vertically, and put it horizontally behind the El Capistan and the C9, then I'll have room to add something else in it's spot, and I also have a spot to the left of the Fishman to fill. 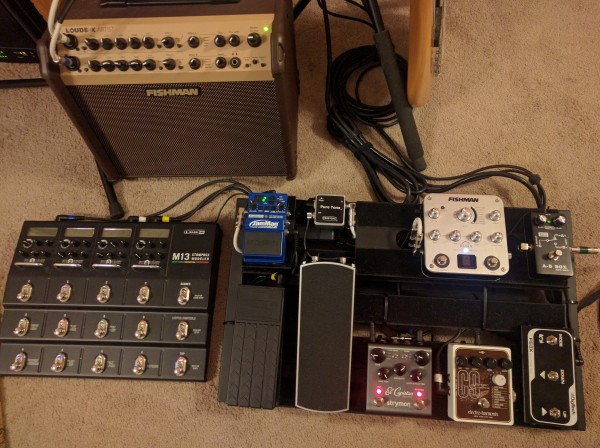 I also got some zip-up sleeves to run the cables through, and was able to separate power and instrument cables into separate tubes.  It's a little rough, but much better than it was: 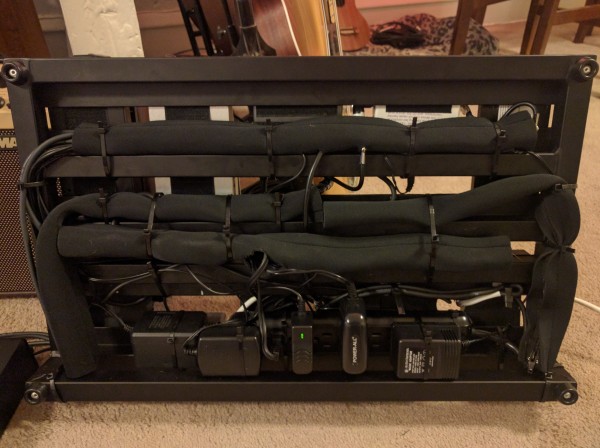